Smithville Artwalk, working with new mediums and 1692 Creations on Facebook.

The second Artwalk in Smithville Village, hosted by Underground, was an absolute success, I honestly can't wait until September!! As I walked into the house last night nearly collapsing from exhaustion I kept thinking of new ideas...I felt like my brain was ready to explode, cursing myself for being to tired to materialize these thoughts. Being around so many talented people all day got me so inspired and I couldn't do anything about it! 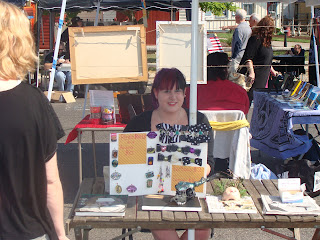 It was great meeting so many awesome people yesterday, whether it be fellow artists or admirers of art. Though rain was called for, it was sunshine all day. The wind was pretty destructive at times; knocking down glass frames and shattering them, making tents and art go flying across the parking lot and causing general havoc, I had to take my umbrella down because it kept flying out of the table and nearly impaling me, so I got some pretty bad sunburn. I can't complain though; I sold some art, met some great people and made a few bucks. What can be better? And all for Free? Perfect.

Now for some more updates. I FINALLY made a Facebook page for jewelry and what not. Actually, I lied. I made it in December but I just recently got around to posting stuff on it. Better late than never right?

So, if anyone actually reads this blog and doesn't already like it, please do so! :)

It's a work in progress, to say the least.

Now onto a few projects I've been working on. I've had the idea in my head for a while about using bones in my art, but it wasn't until the last couple of months I've actually put the thought into practice. I found an old deer skull nailed onto an old barn at a relatives and decided to have a go. The skull wasn't in great condition; I had to rip off one side of the jaw off because it was too fragile,( but I extracted the teeth out of it and plan on making some sort of bracelet), a horn is missing, and the remaining horn was gnawed on some time by squirrels. Even in it's condition I still saw the beauty in it, and I knew I had to paint it. 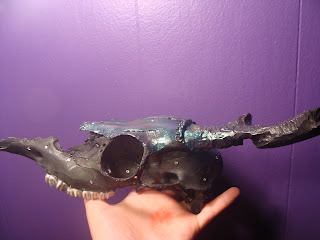 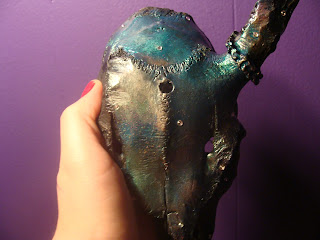 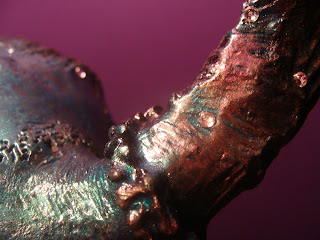 I started by first painting it black, than gradually layering colors (powdered pigments), adding a bit of glitter and finally Swarovski crystals to make a nebula/space scene. I also painted the teeth a silvery sheen.

The camera didn't really capture all of the awesome colors that were on this piece, but I'm sure you guys get the jist of it.

The next project I did involved dried foliage. an antique doll head and plastic crosses. 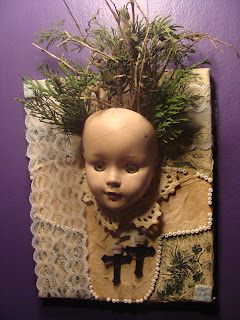 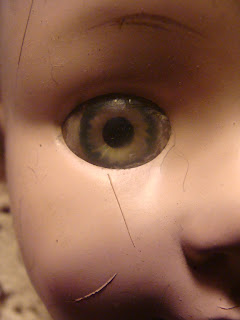 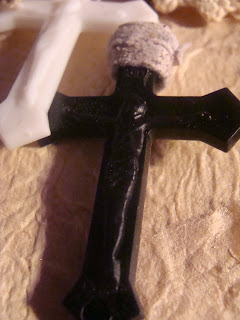 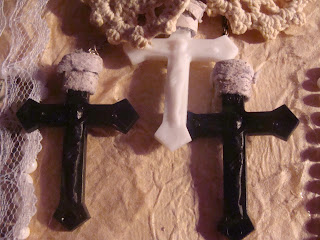 This was a fun one to do! When the project is laying down, the dolls eyes are closed and when it's hung up they come open. I had this one displayed at the artwalk, everyone was so creeped out by it, much to my amusement! ;) I found the doll at a big flea market, at the end of the day some people just leave their stuff for people to take, I saw this doll and knew I had to have. I'm not sure when the doll head is from, I'm going guesstimate from the 50's or 60's. It wasn't in good condition so I didn't feel bad about ripping it apart. I'll totally be making similar projects like this in the future.
Posted by KD Cyr at 2:47 AM

KD Cyr
Scattered on these pages, you will catch a glimpse into 1692 creations. I do not limit myself with what materials I use to create, I am a firm believer in the saying “One man’s trash is another man’s treasure”. My favorite art supply stores are the dingy flea markets and yard sales scattered throughout Southern New Jersey. I will try and keep this blog updated as much as possible with new projects, events and other fun stuff!